Hey there, everybody! I’ve been invited to play the MAGFest Chipspace Showcases for the 8Static block on Friday, 2017/01/06 at 12:30PM, and I gleefully accepted! Here’s the block: 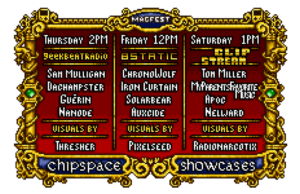 Be there-wave or be square-wave!

I made an Android and an iPhone ringtone of my “hit single” of The Aftermath called “Mekkwarrior”. I’m about five years too late, but hey, better late than never.

Over the weekend, I saw the gender-swapped Ghostbusters remake. Here’s what I thought about it:

END_OF_DOCUMENT_TOKEN_TO_BE_REPLACED

I released a new EP today! It’s a collection of tunes made for the Sega Genesis system (or the Sega Mega Drive if you live outside of the Americas). This album has been in the works for a few years, but I felt like it was finished so I released it today! You can buy it on bandcamp here.

Back in November of last year, I went to a Hackers-themed Rave/Dance party. While I was waiting on line for the party to open, a guy gave me a free cassette with his music. That’s fine and all, and I appreciate free stuff, but the only way to get a digital copy of his music is to record it from a tape onto a computer. That wouldn’t be so much a problem, but why make the music listener jump through hoops just so they can listen to it in their preferred format? Besides, I don’t have one of those converters and it would be easier just to give me a digital downloadable copy.

…Which brings us to Kanye West. Don’t get me wrong, I’m not one of those people who hate Kanye for whatever reason. He has his flaws, but I find his rapping and production to be eminently listenable (which is more I can say for Kendrick Lamar’s good kid, m.A.A.d city; Sorry, fans, but it’s not my cup of tea. I found Mr. Lamar’s whispering on that album painful to listen to). I really wanted to buy his new album. Unfortunately, Kanye made that so fucking hard to do. Like the aforementioned Hackers-party-cassette-hocker, he made his album limited in terms of format and convenience: he basically forced potential customers who wanted to get downloads of his new album to go to torrents, because that was the only way they were available, short of converting the Tidal streams themselves. Granted, it is Kanye’s music (or rather his label’s music) and he (or his label) can sell it wherever and however they damn well please. It’s just that it’s extremely idiotic in 2016 to limit options for your customers if you want them to pay for it, because if you do, you’re basically asking them to pirate your works and you have nobody to blame but yourself. I say this as an artist: if you don’t want people to pirate your stuff, make it available for purchase.

Playtesting usually happens one-on-one or with very small groups of players. You’re often watching testers as they play, taking notes and generally being very quiet (if not behind one-way glass). Your main goal is to see how a player approaches the game, where they spend their time and where they are confused and get stuck. Back at Lucas, and I believe it started with Indy, we would have Pizza Orgies. After work, the whole Game’s group, plus friends and family would get together, eat pizza and everyone would pay the game for a few hours, then we’d have a large group debrief discussion. These were great because everyone got to chime in and build off other comments.

So that’ll be pretty much what I’m doing for PlayDots, makers of Dots and TwoDots, which are casual mobile games that are similar to games such as Bejeweled and Candy Crush. I finally broke into the Video Game Industry! Hooray for me! 😀

For the entire weekend of Friday 1/8 through Sunday 1/10, I attended a demoparty called Synchrony at the NYC indie game gallery known as babycastles (BTW, if you don’t know what a “demoparty” or the “demoscene” is, go here). All the time I was there, I worked on a chiptune cover of the John Philip Sousa march “The Washington Post” which I cheekily called “The Washington Post (is a shitty newspaper)”. What I did to accomplish this was download the sheet music from mutopia and enter the notes into an Ableton-Live-like music tracker for the Nintendo Game Boy called LSDJ. Rather than download the MIDI and be on my way with DAWs such as Logic, Ableton Live,  and FL Studio, I had to enter in the notes manually. I was done right before the deadline, but I was only able to have the track played straight from the Game Boy and there was no MP3 of the track yet, as I had yet to record an MP3 from my Game Boy into my computer with my DAW of choice, Logic Pro X. When it was time to announce the nominees for the music made at the demoparty on Saturday 1/9, six out of seven of the tracks were played from PCM files (such as WAVs and MP3s) while my track was played live from the Game Boy (remember, I did not  have an MP3 yet), and as soon as I was done, I went straight home and recorded the Game Boy into my computer and I was able to bounce an MP3 of it in time for the competition for everyone to vote.

The next day, voting was closed and the winners of the competitions were announced. I was not expecting to win anything at all. I was just satisfied for a job well done. When third place was announced for music, I heard “‘The Washington Post is a shitty newspaper’ by Iron Curtain”! I won third place! While the first place winner won a modded DMG (i.e. an old brick Nintendo Game Boy with a pro-sound mod), I won a fridge magnet and a pair of NYC subway socks. I didn’t want the modded DMG (I have three of them!), but I was actually thinking about picking up the subway socks. Now I don’t have to!

All in all, this makes me really proud of the hard work I have committed into transcribing the track because many people voted favorably for it, and I got a reward I wanted out of it (not to mention something I can put on a résumé). Considering that this specific demoparty in particular had performances by Chipzel and Ultrasyd, I would gladly go to another demoparty again!

Hey there. I’m Samuel Abram, professionally known as Iron Curtain who does chiptunes, or rather, music made on antiquated computers such as the Game Boy, Sega Genesis (or Mega Drive outside of North America) and Nintendo Entertainment System. I’ve played live with Hannibal Buress and Janeane Garofalo. My mother, Dorothy, made chiptune as far back as 1978 (which makes me a second-generation chip musician). I have an electronic music side project called Teepo Familiar. This is my first post: A summary of the best albums of 2015, in no particular order.

So, those are my choices for albums of the year. What say you, everyone else?

Welcome to WordPress. This is your first post. Edit or delete it, then start writing!